When I first heard of the term ‘Inbound Marketing’, I did not think much of it.

I thought maybe it was just another marketing gimmick. Much later did I realize that my understanding of it was far from the truth. I then did some research to get acquainted with the concept of Inbound Marketing. I was reading up on articles about it online, started following popular blogs on this topic and even took some online courses to further my understanding. But translating this idea of Inbound Marketing into a blog – one that did not just layout the facts pertaining to inbound marketing –seemed to be a difficult task than one imagined it to be.

So I started searching for examples of brands that I may have used in my life that fit the concept of inbound marketing. Sure, in the present day, there are lots of brands that use Inbound Marketing methodologies, but the one that came to mind wasn’t a new brand at all. It had been around since 2002, and since then has been silently doing some terrific work all the while making it look so effortless and matter of fact.

Yes, you guessed it right. I am referring to Google.

While there are several reasons why I consider Google to be inbound, let's start with the most basic and obvious reason which I am sure most of us have experienced. Remember back in 2002 when the most popular search engine option was Yahoo? One fine day I came to know about this new search engine called Google and wanted to see what the fuss was all about. I typed in google.com in to Netscape Navigator browser (Yes I know, Google is that old!) and was immediately disappointed. The page did not seem to fully load. Where were the colourful images, banner advertisements and unnecessary hyperlinks that I was so used to seeing in YahooSearch? See below image for a comparison.

I hit refresh button a few times with no success. Thinking the problem was with Netscape Navigator, I even tried loading the Google page in Internet Explorer. But I was still seeing was the same web page having more white space than text. I was intrigued. Was this a beta version? Are they still testing it? Why were they not interested in filling up their home page with advertisements like all other web sites did?

Later when I read ‘The Google Story’ by David Vise, I was super excited to learn the reason for this. Google wanted to do the opposite of what Yahoo did. Even before its users had a chance to search using its search engine, Yahoo was diverting the users to other web pages (within Yahoo and other web sites) inundating them with news and articles through their banner advertisements and category links. These users eventually bookmarked the destination web pages and would then directly go to those pages instead of using Yahoo search engine to find what they were looking for. Also, it was natural to do so as search engine results were not very fast, relevant or accurate back then. By not having any unnecessary links or advertisements in its home page, Google on the other hand, was attracting any and every internet user to try its search engine and then gave them relevant links. And all this was achieved without placing a single print, radio, television or billboard ad to promote its search engine (The very first Google search engine ad was a television commercial aired during the 2010 Super Bowl in the US).

Eventually, high usage of its search engine led to better search results. But Google did not stop there. It constantly updated its then-famous PageRank algorithm to ensure that all-important and relevant parameters were considered in order to guarantee accurate and relevant search results every single time. Updates also ensured that blackhat SEO tactics that became prevalent later on did not influence search results. Google also heavily invested in continuously indexing and archiving the millions of web pages of the growing World Wide Web using sophisticated crawlers and spider bots. This ensured that search results were fast, really fast (milliseconds compared to the 5+ seconds taken by the likes of Yahoo, Altavista and Lycos).

And by consistently providing accurate search results every single time, Google succeeded in converting loyal visitors into loyal customers–the ones who stuck to the google brand no matter which browser or operating system they used. Searching the internet became so mundane that Google soon became a verb “to google” or“googling”. It was added to both the Oxford English Dictionary and the Merriam-Webster Dictionary in 2006.

Remember the time when you typed in your search term with a few typos and Google made an auto-correct suggestion with “Did you mean....?” Later in 2010, google dazzled us with an even more delightful ‘instant’ feature. Google was eager to provide the results faster than you could completely type in your search term! How’s that for fast? But perhaps the biggest indication of delighting customers almost on a daily basis is via Google Doodles in its home page–those geography-specific small sketches and short animated audio/video tributes to notable visionaries, events and places around the globe all through the year. Right from celebrating the contributions of the likes of Nikola Tesla, Charlie Chaplin or Helen Keller, to special events specific to each country such as the Chinese New Year or Diwali, to popular and fun anniversaries, we have seen and experienced it all via the doodle.

It just felt like Google had forgotten to put on the brakes and went on a serial-delighting spree churning out feature after feature including Google Translate, Google Maps, Google Health, Google Finance and Google Scholar just to name a few. The list was never-ending and I was always excited to find out what was brewing next in Google Labs–many of those magic potions currently reside in our desktops, tablets and smartphones.

With the advent of Google Ads and with around 75% of all worldwide searches now flowing through Google, though it is now seen as an advertising platform first and a search engine second, it never compromised on what users have been coming to it for since 2002 – accurate, reliable and fast information reachable within a finger tap. 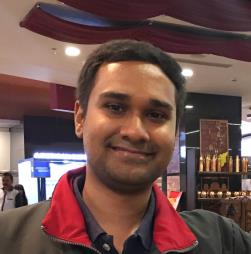 Ram Subramanian
Inbound Marketing Consultant
Table of Contents
What will be your organic traffic this month?
Read More